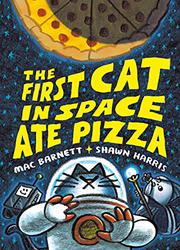 Will extragalactic rats eat the moon?

Can a cybernetic toenail clipper find a worthy purpose in the vast universe? Will the first feline astronaut ever get a slice of pizza? Read on. Reworked from the Live Cartoon series of homespun video shorts released on Instagram in 2020 but retaining that “we’re making this up as we go” quality, the episodic tale begins with the electrifying discovery that our moon is being nibbled away. Off blast one strong, silent, furry hero—“Meow”—and a stowaway robot to our nearest celestial neighbor to hook up with the imperious Queen of the Moon and head toward the dark side, past challenges from pirates on the Sea of Tranquility and a sphinx with a riddle (“It weighs a ton, but floats on air. / It’s bald but has a lot of hair.” The answer? “Meow”). They endure multiple close but frustratingly glancing encounters with pizza and finally deliver the malign, multiheaded Rat King and its toothy armies to a suitable fate. Cue the massive pizza party! Aside from one pirate captain and a general back on Earth, the human and humanoid cast in Harris’ loosely drawn cartoon panels, from the appropriately moon-faced queen on, is light skinned. Merch, music, and the original episodes are available on an associated website.