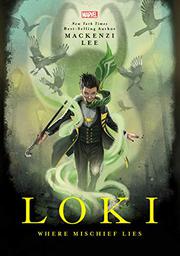 From the Marvel Universe YA series, volume 1

Can a young Loki discover the identity of a magical assassin and avoid his own prophesied fate? The pale-skinned, black-haired Asgardian trickster has always lived in his blond, muscular brother Thor’s shadow. After their father, Odin, sees a vision of Loki leading an army of the dead against Asgard, he grows suspicious of his second son’s magical abilities. Years later, seeking to prove himself (and prove the prophecy wrong), Loki is sent to Earth to aid a London-based secret organization investigating a series of unusual magical deaths. To Loki, this is akin to being banished: Earth has no magic, and he must actually interact with humans. Yet before long, Loki’s distaste becomes curiosity, especially regarding pale, reddish-brown-haired Theo Bell, who walks with a cane. Loki learns that Theo is attracted to boys (but possibly not only boys), which in 19th-century London is a crime. Although Loki uses he/him/his pronouns, he says he exists as both man and woman and that Asgardians don’t care about the sex or gender of others’ partners, to which Theo responds wistfully. Their romance barely blossoms before Loki must make a choice that will shape his life forever.

This deft, nuanced examination of identity, destiny, and agency is a surprisingly tender addition to the Marvel canon.