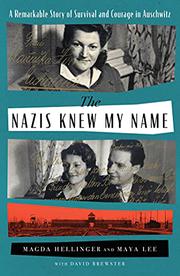 THE NAZIS KNEW MY NAME

A Remarkable Story of Survival and Courage in Auschwitz

A Holocaust survivor’s daughter chronicles how her mother used her influence as a prisoner functionary to save lives at Auschwitz.

In 2003, Lee’s mother, Hellinger, printed and sold copies of a memoir that detailed her experiences as a concentration camp survivor. But it was only after she died that Lee fully appreciated the “complexity of my mother’s story,” which Lee amplified through academic research and by drawing on the extensive recorded testimonies that Hellinger—and those who knew her—left behind. Retaining her mother’s first-person perspective throughout, Lee traces Hellinger’s life from her childhood in eastern Czechoslovakia and reveals that her mother showed an early gift for organizing Jewish community projects. She studied to become a teacher and then opened a kindergarten that Nazis allowed her to continue operating after Hitler’s takeover of Czechoslovakia in 1938. In 1942, she was deported to Auschwitz with other Jewish women from her town. Using her organizational skills, Hellinger helped keep order among her fellow inmates and quickly earned the respect of female Nazi guards. Her German captors began to give her small but important prison jobs and then promoted her to prison leadership roles, which put her in direct contact with high-ranking Nazi officials. Lee shows how her mother deftly negotiated her difficult position to keep both herself and many of her fellow inmates alive. When Nazi officials chose sick prisoners to die, she used her influence to spare lives. When new prisoners arrived, she helped them learn “the ways of the camp so they would have the best chance of survival.” Written in part to clarify Hellinger’s true relationship to her captors, this book offers a much-needed perspective on the roles many so-called collaborators played in helping fellow concentration camp inmates survive the Holocaust. “Magda has been misrepresented and judged unfairly by some survivors simply because of the positions she was forced to hold,” writes Lee, who provides a solid corrective.