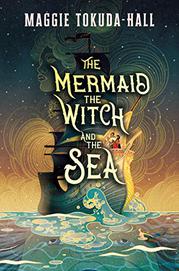 THE MERMAID, THE WITCH, AND THE SEA

As the Nipran Empire seeks total domination of the Sea, a genderfluid pirate and young Imperial noblewoman fall in love.

Fifteen-year-old Evelyn Hasegawa faces a long sea voyage that will end in an unwanted arranged marriage, so she jumps at the chance to make a friend when she meets Florian, the sailor assigned to guard her. Florian harbors resentment toward privileged Imperials, but Evelyn’s wit and sincerity slowly melt his cynicism, though not enough for him to reveal that Florian is also Flora and that their ship, the Dove, is actually a slaver disguised as a passenger ship. Flora is determined to earn enough money to start a new life with her brother, and it is this dream that has driven her to carry out the Dove’s cruel business up until this point. But as her relationship with Evelyn deepens, Flora’s resolve starts to crumble. Careful prose juxtaposes gentleness and brutality, contrasting the tender emotions between Flora/Florian and Evelyn and the violence of a pirate’s life. Set against the backdrop of colonial expansion, this nautical fantasy goes beyond mere swashbuckling to examine the impacts of imperialism and misogyny on a diverse cast of varying ethnicities, sexualities, and gender identities. Witches, mermaids, and secret operatives add layers of magic and intrigue to the queer romance at the heart of this book. Flora is Black and uses he/she/they pronouns; Evelyn’s homeland is a fantasy equivalent of Japan.