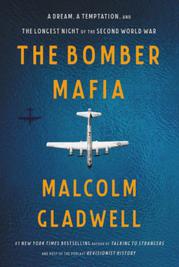 A Dream, a Temptation, and the Longest Night of the Second World War

Another Gladwell everything-you-thought-you-knew-was-wrong page-turner, this one addressing a historical question that still provokes controversy.

During the unprecedented slaughter of World War I, bombers played a trivial role. However, by the 1930s, many military thinkers concluded that they were the weapon of the future. Were they right? Gladwell concentrates on the careers of Gens. Curtis LeMay and Haywood Hansell, but the author includes several of his characteristic educative, entertaining detours—e.g., histories of napalm and the Norden bombsight. Between the wars, all rising American Air Corps officers attended the Air Corps Tactical School in Alabama. A small part of the faculty, the Bomber Mafia, taught that high-altitude, daylight, precision-bombing would win wars. During World War II, Mafia stalwart Hansell sent fleets of bombers to destroy German and Japanese industrial targets. Unfortunately, due to weather, enemy resistance, and failure of the overhyped Norden bombsight, the bombs mostly missed. Gladwell delivers a fairly flattering portrait of LeMay, who “had a mind that moved only forward, never side­ways…[and] was rational and imperturbable and incapable of self-doubt.” Heading the 21st Bomber Command in the Pacific in the fall of 1944, Hansell was conducting high-altitude precision daylight bombing of Japan, with the usual poor results. Replacing him in January 1945, LeMay did no better—until he changed tactics, sending missions at night, at low level, loaded with firebombs. His first round of bombing created a firestorm that killed an estimated 100,000 Tokyo civilians. LeMay’s bombers went on to devastate 67 Japanese cities, and the raids continued until the day of surrender. In his opinion, the atomic bombs were superfluous; the real work had already been done. Some historians call this a humanitarian crime that failed to shorten the war. Evenhanded as usual, Gladwell does not take sides, but he quotes a Japanese historian who disagreed: “if they don’t surrender, the Soviets invade, and then the Americans invade, and Japan gets carved up, just as Germany and the Korean peninsula eventually were.”