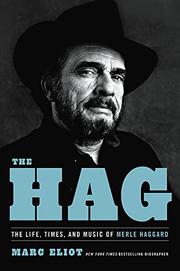 The Life, Times, and Music of Merle Haggard

Raised among the oil fields of central California, he was constantly in trouble with the law as a young man, locked up in San Quentin when Johnny Cash gave a celebrated concert to the inmates. Suddenly aware that he could pursue a career in music, Haggard hit the road with songs about the life he knew, all swinging barroom doors and jailhouse floors. Eliot, who has written books about Bruce Springsteen, Phil Ochs, and the Eagles, among others, can be a trifle overblown: “I was constantly reminded of how Shakespearean the drama of his life was, how his early years echoed those of a young Hamlet, who suffers the premature death of the father he keeps alive in his dreams, dreams that produced an unshakable rage that warps the love he has for his mother and drives him to commit self-destructive acts.” Still, he turns up aspects of Haggard’s life and career that haven’t been well documented, including his wife’s terrible death from Alzheimer’s and his friendship with a kid who definitely did smoke marijuana while turning millions of hippies on to Haggard’s music: Gram Parsons. “He doesn’t hate long-haired people, or even moderately dislike them,” said Parsons to a Rolling Stone reporter. “He’s a nice, sweet cat.” Haggard could turn sweetness into ire but mostly for good reason, as when Bob Dylan (perhaps inadvertently) dissed him and the Nashville industry dumped him, Cash, and countless other classic country acts from the rosters in favor of new pop-country idols. Never an insider, Haggard easily took to the outlaw role. However, as Eliot shows, he was also appreciative of both the performers who had come before him and contemporaries like Dylan, Paul McCartney, and the Rolling Stones along with Cash, Owens, Jones, and his country peers.