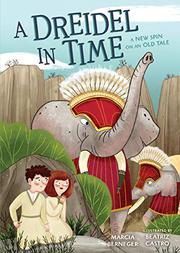 A DREIDEL IN TIME

A New Spin on an Old Tale

They are disappointed when their grandparents give them only a very old, misshapen dreidel to share, but Mom knows that this dreidel has magical properties that once helped her reach a true understanding of Hanukkah. The children’s first spin lands on Shin, meaning they have lost something. They have also somehow landed (with the dreidel) in ancient Modi’in, where Jews are in conflict with the Syrian king. The children find that they are speaking and understanding Hebrew and quickly become caught up in the fight between the Maccabees and the Syrian army. After the next spin, Nun, meaning neither gain nor loss, two years have passed and the battles continue. Hey, or halfway, leads to “a great miracle happened here”: one night’s oil burning for eight nights. Finally they spin Gimmel, or everything, and at last return home with a better understanding of their holiday traditions. These modern children are not only witnesses; they use historical information to guide the Maccabees’ leaders and to participate bravely in the events—to the extent that the author seems to imply that these ancients might not have been able to succeed without them. Castro’s black-and-white cartoon illustrations provide readers with visual context, depicting both historical and modern characters with pale skin.

This exciting retelling of the Hanukkah story should appeal to both Jewish and non-Jewish children.