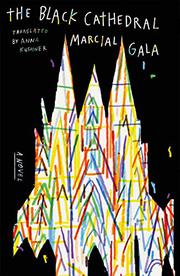 Award-winning Cuban writer and architect Gala links the fate of a community with the doomed construction of a cathedral in this dark, violent, often comic novel, his first to be translated into English.

The Stuart family's arrival in a rough part of Cienfuegos, Cuba, sparks the neighbors' interest: "If you're born black, you're already screwed; imagine if, in addition, you have to live in the squalid rooming houses of a neighborhood like this." Graffiti here in Punta Gotica reads "NO ONE GETS OUT OF THIS NEIGHBORHOOD ALIVE." The two Stuart sons are smart but odd, the beautiful daughter artistic. Their father, a religious zealot, is obsessed with building a cathedral. The architect hired to design it dreams of the city of the future, viewed from the back of an angel: "I saw the Cienfuegos of the future, a beautiful city, full of elegant buildings...the celestial Jerusalem." Events don't unfold that way, to say the least. Later the architect comes to believe "that it was called the Black Cathedral for those with darkness in their hearts." Told by a shifting, overlapping multitude of voices, the novel explores the interconnected lives of the local characters: kids, petty criminals, politicians, artists and writers, ghosts of people murdered by a serial killer, and the killer as well, speaking from death row. Though some move abroad, all find themselves affected by the violence and desperation of Punta Gotica and by its strange, unfinished building. As Arturo Stuart labors over "the first cathedral that is truly for and by the meek," one of his sons is initiated into the Cuban religion Palo, and the other finds work at a Russian mobster's brothel. The two sons eventually commit a terrible crime together (though worse crimes have already been done by an African Cuban character nicknamed Gringo). A retired principal of the Cienfuegos school laments of his former pupils, "They practically all turned out bad. Even the good ones aren't like we expected. I would call them the Black Cathedral generation." Trying to make sense of the Stuart boys' crime, one character says, "They were children, wicked children like all of us, children without a childhood."