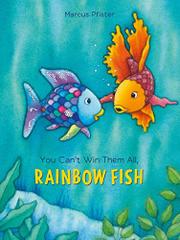 YOU CAN'T WIN THEM ALL, RAINBOW FISH

Rainbow Fish and his friends are playing hide-and-seek. Rainbow Fish is the first to be “it.” He has played this game so many times he believes that he knows all the hiding places in the shoal. Overconfident, he sets off to look. But he can’t find anyone! One by one the fish swim out of their hiding places, much to Rainbow Fish’s chagrin. Then, when Little Blue is the seeker, he finds Rainbow Fish immediately. Rainbow Fish angrily throws a tantrum and swims away. The newest character to the series, Red Fin, gently explains to Rainbow Fish that sometimes you win, and sometimes you lose. An apology neatly wraps up this aquatic morality tale. Translated from German, the text is didactic and straightforward; the one textual bright spot is an enthusiastic, “I’ll find you in a fishy flash!” Lending visual sparkle, of course, is the series’ trademark foil scales. Saturated blues and greens, with splashes of yellow and pink, infuse the underwater world.

Pfister tackles a common frustration with which youngsters will relate; unfortunately, glittery scales are the only thing to add shine to these lackluster depths.