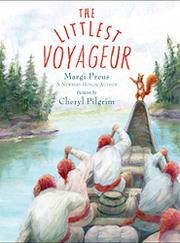 Stowing away with French Canadian fur traders in 1792, a loquacious red squirrel embarks on a life-changing adventure.

Each spring, Jean Pierre Petit Le Rouge, a squirrel with wanderlust, watches brave, strong voyageurs depart in canoes from Montreal and return the following autumn. Determined to be a voyageur, Le Rouge hides in a canoe paddled by eight stout voyageurs, part of a brigade of five. Soon his incessant chattering distracts the voyageurs, who become separated from the rest of the brigade, but, after ascending the highest tree, he points the crew back on course. More than once, pesky Le Rouge barely escapes becoming squirrel ragout. He’s just beginning to feel like a real voyageur when they reach the trading post on Lake Superior, where he discovers the voyageurs exchanging their cargo for animal skins to return to Montreal. Heartsick, Le Rouge decides he cannot be a voyageur if it involves trading animal skins, unless he can change things. Le Rouge relates his story with drama and flair, presenting a colorful prism through which to view the daily life of a voyageur. Peppered with historical facts and (italicized) French phrases and names, this exciting, well-documented tale (with a contemporary animal-rights subtext) proves educational and entertaining. Realistic pencil drawings highlight Le Rouge’s memorable journey.

A rousing introduction to the life of a voyageur told from a unique perspective.