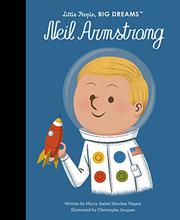 Fame and accomplishment come easily to an astronaut.

An easily accessible biography of a notable 20th-century American.