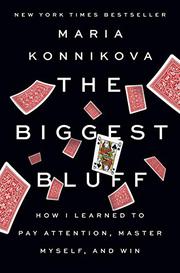 How I Learned To Pay Attention, Master Myself, and Win

In her latest, the author opens at the World Series of Poker, where, “for a neat ten grand, anyone in the world can enter and take their shot at poker glory”—and a chance to win up to $9 million. Konnikova seeks to explore the fine line between skill and luck, “to learn what I could control and what I couldn’t.” If ever there were a game to illustrate those categories, poker is it: There’s a numeracy and a logic to the game, to say nothing of the psychology of such things as the tell, the gestures or betting behaviors of one’s opponents at the table. There are other lessons to learn along the way, including forgoing complacency and simply paying attention to everything that’s unfolding before you: “Presence is far more difficult than the path of least resistance,” writes the author with oracular economy. The theme of untangling what might be attributed to skill and what to chance engages Konnikova throughout: How much of her success has turned on hard work and how much on being in the right place at the right time? Whatever the case, she traveled to all the right places—Macau, Las Vegas, Monte Carlo—and even made some money along the way. The payoffs for readers are more cerebral, including Konnikova’s observation that we think we have much more control over our lives than we really do. She peppers her reflections with the sage advice of experts (“Less certainty, more inquiry”) as well as headier stuff from the scholars, including John von Neumann’s game theory, which turns out to have been inspired by, yes, poker and the “little tactics of deception” that it involves.

A smart and subtle delight—highly recommended for fans of cards and brain-hacking alike.