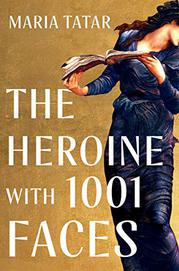 THE HEROINE WITH 1001 FACES

From Penelope and Pandora to Katniss Everdeen and Lisbeth Salander, the "hero's journey" gets a much-needed makeover.

In her latest, Tatar—the Harvard professor of folklore and mythology and Germanic languages and literature who has annotated collections of classic fairy tales, Brothers Grimm and Hans Christian Andersen, among others—begins by pointing out that all of the faces of heroism discussed in Joseph Campbell's influential book, The Hero With a Thousand Faces (1949), are male. To correct this requires a revision of the concept of heroism itself, rooted in numerous foundational texts. Starting with Greek mythology and Scheherezade and moving through the centuries all the way to the Game of Thrones series and The Queen's Gambit, Tatar incisively explores women's reinvention of heroism to embrace empathy, compassion, and care, often to pursue social justice. Among the many high points in this engaging study: an analysis of Little Women and Anne of Green Gables as autofiction, Jurassic Park as a reimagining of “Hansel and Gretel,” Harriet the Spy as an antiheroine, and a deep dive into the backstory of Wonder Woman. Receiving their own chapters are female sleuths such as Nancy Drew, Miss Marple, and the less well known characters of Kate Fansler, an academic, and Blanche White, who is Black. The book really takes off when it gets to contemporary culture, particularly in a section that identifies a female version of the "trickster" archetype in Everdeen and Salander. Of this lineage, among the shared interesting traits not traditionally associated with women characters is a prodigious appetite. "Like Gretel, Pippi Longstocking, and Lisbeth Salander before her,” writes Tatar, “Katniss gorges on rich food yet her hunger never ceases." The text is illustrated with many reproductions of paintings and other artwork—including a postcardworthy panel from the original Wonder Woman—that add much to the text.

As Wonder Woman might say, Suffering Sappho! This book is fascinating, fun, and consistently enlightening.