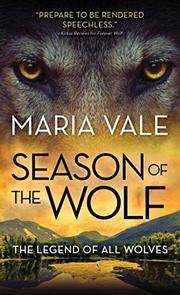 SEASON OF THE WOLF

From the Legend of All Wolves series, volume 4

Readers return to the Great North Pack as Evie Kitwanasdottir fights for her fellow werewolves and struggles to maintain her position as Alpha.

Picking up from Forever Wolf (2019), the Great North Pack is trying to rebuild after a devastating attack and keeping several Shifter prisoners as the spoils of the barely won victory. Wolves and Shifters aren’t the same in Vale’s world; they’re enemies, and rightly so, as Shifters often align themselves with humans in their quest to conquer the wolves. Shifter Constantine, despite aiding the Great North Pack during the humans' assault, is one of the pack's prisoners, and since he seems the most dangerous, he's kept under Evie's personal supervision. This is more than just an enemies-to-lovers paranormal romance, though there would be nothing wrong if it were. Evie and Constantine are two people warring with a centuries-long history of mistrust and hatred between their species to find acceptance and love with each other. It’s heady and powerful and makes the external conflict seems small in comparison. Greater machinations are at play—who is controlling the Shifters and influencing the humans? Breadcrumbs are dropped sporadically, though don’t expect any full resolutions. There seems to be much more to come with the Great North Pack and its inhabitants. Evie and Constantine share the aspiration of wanting to do the right thing for those they see as family, even if right versus wrong has become skewed for both of them. Vale is a rare writer, getting to the heart of her characters—their fears, their motivations—without sacrificing any of the grander picture. She quickly catches up readers, new and returning, with what feels less like summary than like poetry; her writing has never been better.