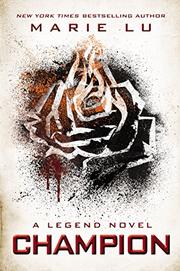 From the Legend series, volume 3

This exhilarating finale to the dystopian Legend trilogy delivers on the promises of the genre without ever being predictable about details.

June and Day are finally on the right side of the law, but nothing’s gotten any easier. June, the former soldier, is now one of three Princeps-Elect, next in line to lead the Senate. Day, “most-wanted-criminal-turned-national-hero,” is now the face of popular support for the young Elector. The future’s dazzlingly bright, right? In fact, from their high perches, June and Day can see everything about to go horrifyingly wrong. The Elector knows the Colonies are about to invade, and he thinks a plague cure will save the day—a cure he’s convinced they’ll discover by experimenting on Day’s brother, Eden. Day will never let the Republic have his brother again; he barely got Eden back alive after the first time they took him for medical experiments. On the other hand, since Day is dying, it’s not clear what he can do for Eden or the Republic. Brief international travel expands the worldbuilding of this universe: June and Day had encountered the capitalist dystopia of the Colonies in Prodigy (2012), while June here encounters the seemingly more idyllic society-as-game of Ross City, Antarctica. A civilization run as if it were “The Sims” is intriguing, and it’s disappointing that June spends little time there, but there’s plenty of betrayal and action to resolve back in the Republic.

Ever respectful of the capacity of its readers, this series offers a satisfying conclusion of potential rather than a neatly wrapped denouement