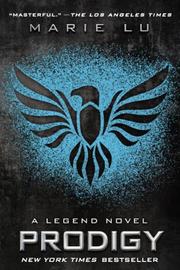 From the Legend series, volume 2

After their escape from Republic forces at the end of Legend (2011), popularly beloved rebel Day and Republic darling June need help. They lack both friends and money, and Day’s wounds are festering. There's no help for it: They’ll have to throw their lot in with the revolutionary Patriot forces. Day, whose own rebelliousness takes a playful, Robin Hood–esque approach, has always avoided the Patriots, with their cavalier attitude toward life and death. But with his life at risk from injury and no leads in his quest to find his missing baby brother, he has few options. After a too-lengthy buildup, Day and June find themselves embroiled in a dangerous assassination plot. They just want to protect their few remaining loved ones while saving their country—is that so wrong? The pathos of Day and June's erstwhile romance shines through without detracting from the tension of their rebellion; both riveting action and entertaining characterization keep their quest engaging (in one scene June apologizes through both ruthless tactical training and "the tragic slant of her eyebrows"). Meanwhile, the heroes’ confusion when faced with the mores of the world outside their own Republic shines a worrying lens upon our own world.

The slow build culminates in a satisfyingly cinematic climax