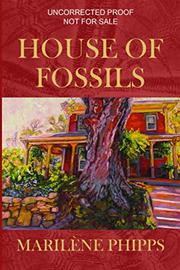 A Haitian American immigrant ponders her life and traumatized homeland in this novel about exile and return.

Phipps tells the story of Io, a mixed-race woman born to an affluent Creole family in Port-au-Prince, as she consolidates her life as an artist and writer in Cambridge, Massachusetts, while still feeling the tug of her past in Haiti. The loose-limbed, episodic narrative unfolds over a decade, starting in 2004 with a dreamy prelude in which Io vacations on the Nova Scotia coast, stays in a strange house full of fossils, and meets a mysterious little girl who is somehow connected to the celebrated ghost ship Mary Celeste. The tale moves on to Io’s legal wrangles with her ex-husband and her estrangement from their adopted Haitian daughter, Eveline; her new marriage to a kind Englishman named Thomas; and a tense Alaskan cruise with her sister, Europa, an eccentric lost soul still living in Haiti who bears emotional scars from brutal relationships with men. A family reunion in Florida reconnects Io with her cagey, charismatic Aunt Rose and other relatives and lets her revisit her socially prominent clan’s history before it was driven out after Rose’s husband was assassinated by Haitian dictator François Duvalier. The book closes with Io’s return to Port-au-Prince, where she takes in the city’s squalor, tensions, and faded glory. She recalls her own narrow escape from a military death squad hired to kill her by a tenant behind on her rent, witnesses a confrontation in which her cousin almost shoots a thief, and goes to the still gorgeous cathedral.

Phipps, a Haitian American poet and novelist, broadens Io’s experiences into a troubled portrait of social fissures. Io lays claim to a legacy of oppression because of the suffering that Haitians endured from European colonialism and slavery. Yet she’s uneasily aware of her own racial privilege, of the seething resentments dividing the light-skinned, Creole elite she belongs to from the poor, Black Haitians that her family employs as servants. She feels this antagonism may have poisoned her relationship with Eveline, a Black girl born in a slum. The vibrant novel uncoils in rich ruminations and conversations sprinkled with nuggets of history and cultural lore. Sometimes the author’s prose is stark in its depiction of Haitian reality and the hardness it breeds in the poor and rich. (“Beggars swarm around the car, knocking wildly at all windows,” Io observes on the ride in from the Port-au-Prince airport. They “would instantly start slapping and fighting off each other to get the first grab at whatever morsel is handed out, then pummel the one who got it, snatch it from him and run. You’ll lose your arm and anything on it if you try to give alms.”) But Phipps can also shift into a haunting lyricism, as when Io imagines a shipwreck, “feeling the ancient despair of one woman drowned, huddled onto herself, detached like a single musical note etched on a dark green, empty sheet, her disheveled long hair entangled with seaweed that wrapped around her naked white form in long strips resembling the final dress of a mummified being.” The result is an imaginative meditation on Haiti’s beauties and discontents and the mark they leave on a writer’s soul.

An engrossing tale of fractured families trying to cobble their identities back together.