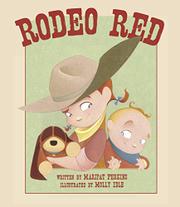 Rodeo Red is a child who loves all things cowgirl, especially her hound dog, Rusty, who’s depicted as a floppy-eared stuffed toy. When a baby brother, called Slim, enters the scene, she smells trouble even though her parents—“the Sherriff and her Deputy”—seem “smitten.” Red is frustrated when her brother interferes with her things, especially when Rusty goes missing and she finds him held in the sleeping Slim’s grip. Although necessary for plot progression, it seems a poor parenting move when the Sherriff and Deputy let Slim keep Rusty and punish Red for trying to retrieve him. A more understanding adult, Aunt Sal, mails a plush cat as a replacement, and Red sees an opportunity to pull a switcheroo and successfully retrieves Rusty. Happily reunited with her trusty toy, the closing picture shows Red astride a rocking horse, her beloved dog clutched by her side, and free of interest in bonding with her brother. Idle’s background in animation is apparent in her deft handling of the story, and such details as Red’s lassoing Slim when she tries to get Rusty and the use of the bars of the back of a chair to depict “the holding cell” (a timeout chair) make the text more believable with regard to the parents.