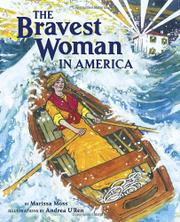 THE BRAVEST WOMAN IN AMERICA

A girl who loves the sea becomes keeper and protector of those on the water.

Ida Lewis' father was the lighthouse keeper of Lime Rock, off Newport, R.I., and he took her with him, teaching her to light the lamps, to polish the lens and to row. When she was 15, her family moved to a house on the tiny island, and in the next year she and her mother took over the work when her father became ill. At 16, Ida rescued four boys, pulling them from the water and rowing through the wild sea to bring them to safety. U'Ren's watercolor, ink and acrylic paintings make the sea as rich a character as Ida, her father and the lighthouse are, waters now sleek, hard sapphire, now greeny and bubbling, now whitecapped and dangerous. An author's note relates that eventually Ida got the title as well as the work of lighthouse keeper and that she continued to save folks from the water even into her 60s. Ida died in 1911, before women got the vote, but her heroism was recognized by Congress and the press during her lifetime—Harper's Weekly, the New York Tribune and Putnam's Magazine all called her “the bravest woman in America.” All that's missing is a little bibliography.