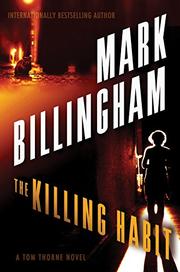 One of DI Tom Thorne’s most harrowing cases begins with evidence that someone’s taken to slaughtering…cats.

“Tomicide?” Thorne’s boss, DCI Russell Brigstocke, wonders if the Homicide squad should rename itself after it’s asked to investigate the gruesome deaths of at least 15 cats throughout greater London. Since butchering animals is, along with wetting the bed and setting fires, one of the classic symptoms of a nascent serial killer, the powers that be are worried that someone is preparing for a more serious spate of felonies. But consulting psychiatrist Dr. Melita Perera plants a still more disturbing seed in Thorne’s head: What if, instead of working up to homicide, the cat killer is actually cooling down in between human murders? As soon as Thorne and DI Nicola Tanner, back on the job after her partner’s own murder (Love Like Blood, 2017), start to look for unsolved cases, an unnervingly large number of possibilities leap out: retired librarian Patricia Somersby, Bristol University student Annette Mangan, Norwich physician Leila Fadel, all of them strangled by an unknown person who remains at large—not to mention Alice Matthews, a victim who’s still cooling in the mortuary. In addition to spearheading Operation Felix, Thorne and Tanner must also decide whether city trader Andrew Evans, recently released from prison after his distracted driving claimed the life of a boy he ran down, can possibly be innocent in the fatal shooting of Adnan Jandali, like Evans a drug addict hopelessly in debt to his suppliers, despite the mountain of evidence against him. The main feature the two cases seem to share is an endless tangle of false leads. Will they converge in some more spectacular fashion?

The unusual premise will hook you, but it’s Billingham’s patience and persuasiveness in unfolding its grim details that will keep you reading long past the hour when all cats are gray.