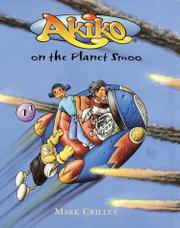 AKIKO ON THE PLANET SMOO

Opening episodes of a comic-book series created by an American teacher in Japan take a leap into chapter-book format, with only partial success. Resembling—in occasional illustrations—a button-eyed, juvenile Olive Oyl, Akiko, 10, is persuaded by a pair of aliens named Bip and Bop to climb out her high-rise bedroom’s window for a trip to M&M-shaped Planet Smoo, where Prince Fropstoppit has been kidnapped by widely feared villainness Alia Rellaport. Along with an assortment of contentious sidekicks, including brainy Mr. Beeba, Akiko battles Sky Pirates and video-game-style monsters in prolonged scenes of cartoony violence, displaying resilience, courage, and leadership ability, but not getting very far in her rescue attempt; in fact, the story cuts off so abruptly, with so little of the quest completed, and at a lull in the action to boot, that readers expecting a self-contained (forget complete) story are likely to feel cheated. (Fiction. 10-12)