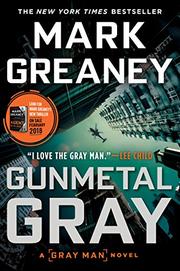 The latest high-energy entry in the Gray Man series (Back Blast, 2016, etc.).

Courtland Gentry, also known as the Gray Man, is everything you’d want in a fictional professional killer. The CIA agent–turned-freelancer is still on America’s side, he’s deadly against superior odds, and he trots out a conscience now and then. The CIA sends Gentry to Hong Kong for an assignment that is "possibly the most important of his life," but he's soon kidnapped. Identifying himself to his captors as “just a hired hit man looking for work,” he isn’t in town a full day before he kills two Chinese intelligence operatives. Then he learns his true mission, finding a Chinese defector for the CIA. Gentry isn’t sure whether he’s rescuing or kidnapping Fan Jiang, but it doesn’t matter. Fan is an information technology specialist from Mainland China who wants to go to Taiwan. The CIA wants Fan because he knows “the Chinese secure networks inside and out,” Chinese intelligence wants him back for the same reason, and even Vietnamese soldiers and gangsters are in on the hunt. And there is Zoya Zakharova, the beautiful (of course) Russian foreign intelligence agent assigned to bring Fan Jiang to Russia. She’s Gentry’s one adversary who is his equal. The action is fast and complicated with bodies galore—all for a good cause, of course—and one literal cliffhanger. Author Greaney co-wrote several Tom Clancy novels, and this thriller is tailor-made for Clancy’s fans. The Gray Man’s character is several shades darker than Jack Ryan’s, though he lacks Ryan’s depth. But Gentry always gets the job done for the US of A, and he entertains while doing it. Whether he kills or beds Zakharova, readers will have to find out.

At about 500 pages, this one is fat, fast, and fun. Clancy's spirit lives on.