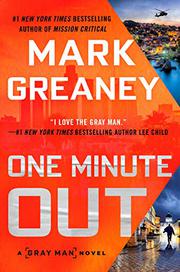 Ninth in the author’s Gray Man series (Mission Critical, 2019, etc.) in which “the most elite assassin in the world” has his hands full.

Ex–CIA Agent Courtland Gentry (the Gray Man) has Serbian war criminal Ratko Babic in his gun sight, but when he decides instead to kill the old beast face to face, he uncovers a massive sex-slavery ring. “I don’t get off on this,” the Gray Man lies to the reader as he stabs a sentry. “I only kill bad people.” Of course he does. If there weren’t an endless supply of them to slay, he’d have little reason to live. Now, countless young Eastern European women are being lured into sexual slavery and fed into an international pipeline, sold worldwide through “the Consortium.” Bad guys refer to their captives as products, not people. They are “merchandise,” but their plight haunts the Gray Man, so of course he is going to rescue as many women as he can. The road to their salvation will be paved with the dead as he enlists a team of fighters to strike the enemy, which includes a South African dude who is giddy for the chance to meet and kill the Gray Man. Meanwhile, Europol analyst Talyssa Corbu meets the hero while on a personal mission to rescue her sister. “You don’t seem like a psychopath,” she tells him. Indeed, though he could play one on TV. Corbu and her sister are tough and likable characters while the director of the Consortium leads a double life as family man and flesh merchant. Human trafficking is an enormous real-life problem, so it’s satisfying to witness our larger-than-life protagonist put his combat skills to good use. There will be a sequel, of course. As a friend tells the wounded Gentry at the end, he’ll be off killing bozos again before he knows it.

Great storytelling about the pursuit of extrajudicial justice.