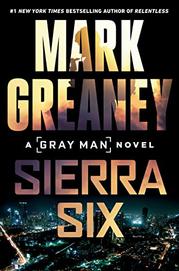 In the 11th entry in the Gray Man series, Gentry unexpectedly faces an old foe.

Courtland Gentry joins Golf Sierra, the counterterror team led by Zack Hightower. Gentry is the new Six, or point man. The last two Sixes were KIA—“It sucked to be the Six.” So the team expects the same fate for the new guy. Chapters alternate between 12 years ago and the present, with harrowing violence and high stakes in both. One bad man connects the two threads: The Golf Sierra team’s current antagonist is Murad Khan, aka Pasha the Kashmiri. The new Six must learn how to work with a team because he’s used to killing on his own. Gentry’s CIA code name is Violator, but he’s also known as the Gray Man. In the present, Khan is thought to be dead until he and Gentry spot each other while the Pakistani plans mass murder of non-Muslims. Gentry has insanely good fighting skills combined with luck and a powerful desire to off “assholes who so richly deserved to die.” He tells Hightower that “I don’t have a death wish. I have a kill wish.” And oh, does the lad get his wish. Both threads have a strong, brave, and appealing woman, and our hero is attracted to both. Alas, Six is too busy for sex. So many bad guys, so little time. Greaney has created a great series character who channels his murderous urges into where they’re most needed (overseas) and leaves the rest of us alone. Gentry brims with self-confidence, such as when he pilots his team over a rugged mountain range in a helicopter he’s not qualified to fly. Those are some of the hairiest, scariest scenes, along with a deadly high-rise battle in the middle of Mumbai monsoon winds.