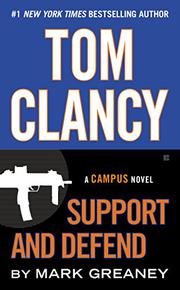 Another timely, techno-geeky thriller from the Tom Clancy franchise.

Greaney (Command Authority, 2013, etc.) populates his latest with most of the bad guys of the “axis of evil,” and then some. As the nicely convoluted storyline sets out, the baddies are a cell led by a “lieutenant in the Ezzedeen Al-Qassam Brigades,” which is to say—and here’s one timely bit—“the militant wing of the Palestinian political organization Hamas.” They’re far from home, plying the waters off India, and they’re bad luck for an Israeli expat who just happens to be a pal of Dominic Caruso, secret agent extraordinaire and, as it happens, nephew to the hyperactive world policeman Jack Ryan. Nothing gets Caruso’s goat more than terrorists freely working evil in the world, but setting to work to do justice, he finds that he’s got quite a puzzle on his hands—for bound up in it all is an enigmatic former NSA agent who’s on the run with a bunch of damaging information on his thumb drive. All that’s needed to complete the tableau is a shirtless Russian head of state, and Greaney comes pretty close to obliging with Spetsnaz toughs and, for good measure, Venezuelan spies, since, natch, Putinistas and Chavezistas and Ayatollistas share the goal of subverting the interests of the civilized world. The yarn is at once shaggy dog improbable and highly realistic, and Greaney incorporates the late Clancy’s fascination for military and intelligence hardware, for micro-Uzis and Intelink-TS backbones and chase-worthy vehicles (“In the dark both SUVs looked black, but once Ethan got closer he realized one was dark green”). And, of course, he works in a bevy of smart and lovely women who know both how to mend wounds and cause them.

It’s by-the-numbers stuff, with the requisite villainy, continent-hopping, décolletage, neat tools and cliffhangers. But, of course, that’s just what Clancy’s fans read him for, and Greaney carries on that entertaining tradition seamlessly.