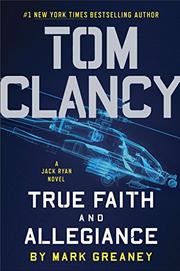 Greaney is at the helm of the action-adventure enterprise built by the military maestro from Maryland (Tom Clancy Commander In Chief, 2016, etc.), this time with a devious yet believable story about radical terrorist attacks in America.

A generation past Red October, the America-hating bad guys have added spyware, hacking, the dark web, and Bitcoins to those ubiquitous AK-47s.