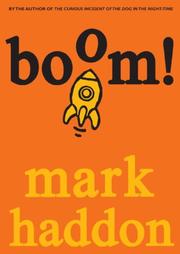 In the wake of his Curious Incident of the Dog in the Night-Time (2003), Haddon offers a slighter but nonetheless hilarious update of a tale originally published in 1993 as Gridzbi Spudvetch! Overhearing two seemingly dorky teachers speaking in an unknown tongue, Jimbo and Charlie start poking around—and find themselves in deeper dutch than they could have imagined. It seems that Earth is being checked out by murderous space aliens as a candidate for invasion or maybe total destruction, depending on their mood. Threats from a laser-fingered stranger and Charlie’s sudden disappearance cast Jimbo and his ill-tempered but resourceful goth big sister Becky into a mad dash to the Isle of Skye, where the aliens have secreted their one “Weff-Beam” station. Jimbo finds himself beamed to Planet Plonk, where he finds Charlie—and a colony of kidnapped sci-fi fans too dazzled at being on another planet to want to escape. Jimbo’s self-effacing narration accommodates both the looniness and the earth-bound emotional ups and downs of adolescents. In all, a well-knit tale that hurtles down a logical path to a satisfying conclusion….well worth a second chance. (Science fiction. 10-12)