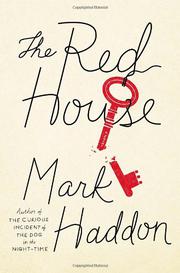 Haddon became a literary sensation with his debut (The Curious Incident of the Dog in the Night-Time, 2003), a critical and commercial success which relied for effect on a tricky narrative perspective—a protagonist who was not only unreliable, but autistic. He then succumbed to a severe case of sophomore jinx with A Spot of Bother (2006), a novel that suggested that the debut was the only gimmick that Haddon had in him. What surprises about his third novel is that it’s not only his best, it’s his most conventional, at least in terms of the plot. Following the death of their mother, a brother and sister, who hadn’t maintained much contact and had felt some estrangement, bring their families together for a weeks’ vacation. With a spirit that evokes A Midsummer Night’s Dream (to which one of the characters compares this idyll), the setup ensures that there will be revelations, twists and shifts in the family dynamic. Angela has three children whom she loves (all detailed richly and empathically), a husband she tolerates, and the memory of a stillborn daughter whom she still mourns (18 years later). Richard, a wealthier doctor who has arranged this family reunion with his sister, has a younger second wife, a career crisis, and a stepdaughter who is as mean-spirited as she is attractive. Where similar novels often devote whole chapters to the perspective of a character, this one shifts perspective with every paragraph, sustaining suspense (sometimes as to whose mind the paragraph reflects) while enriching the developing relationships among people who barely know each other, in a place where “the normal rules had been temporarily suspended.” There will be flirting across generations and gender, sexual orientations discovered and revealed, and deep secrets unearthed. “What strangers we are to ourselves,” muses one character, “changed in the twinkling of an eye.” Yet the plot feels organic rather than contrived, the characters convincing throughout, the tone compassionate and the writing wise.

A novel to savor.