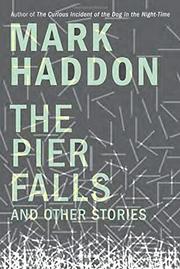 Time and connection are recurring themes in this story collection from the author of The Curious Incident of the Dog in the Night-Time (2003, etc.).

Since he made his debut with the popular Curious Incident, a murder mystery of sorts with an autistic young man as protagonist, Haddon has committed himself to a singularly twisted literary progression. Each book finds the British writer in a different place than the previous one had suggested, over a career that has encompassed children’s books and poetry as well as scripts for radio and television. Thus, it’s no surprise that his first story collection is all over the map in both form and quality. The two opening stories are among the best, with neither “The Pier Falls” nor “The Island” having anything as conventional as a named character. The former provides a tick-tock account of a tragedy, as the casualties accumulate and two survivors forge an unlikely connection, and then shifts into a longer-term perspective on the aftereffects. The latter is one of the stories in the collection where dreams blur with fairy tales, as a princess is abducted and abandoned by a man she assumes is her betrothed. “She realised that there were many worlds beyond this world and that her own was very small indeed,” he writes in a reflection that could apply to other stories as well. Yet some of the others are both more conventional and more contrived, as “Bunny” features another unlikely connection between a recluse and a woman who had been abused by her parents, “Wodwo” finds a holiday family dinner with predictable tensions interrupted by an unexpected stranger with surprising consequences, and the closing “The Weir” finds two other strangers coming together in unlikely circumstances and forging a bond, as “change gets harder,” with “the world shifting too fast in ways he doesn’t understand.”

Haddon deserves credit for taking chances even if not all of them pay off.