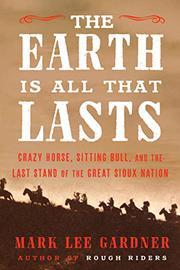 THE EARTH IS ALL THAT LASTS

Crazy Horse, Sitting Bull, and the Last Stand of the Great Sioux Nation

Spirited history of the great Sioux war leaders of the late 19th century and their valiant stand against White encroachment.

Is it possible to say anything more about George Armstrong Custer? Perhaps not, and Gardner, a practiced historian of the West, doesn’t really try. Instead, he places Custer’s demise in the context of a complex Native political and military milieu, with two leaders of widely different dispositions in the forefront. One was Sitting Bull, who, as a holy man endowed with a gift of vision, not only launched a concerted war against the Whites, but also foresaw Custer’s defeat in specific detail. Another was Crazy Horse, the “mysterious Oglala war chief,” whose bravery in the Battle of Little Bighorn verged on the suicidal. Gardner broadens the narrative to embrace related episodes such as the so-called Red Cloud War and the Starvation March, the latter of which made Sitting Bull’s name a household word—so famous that once he surrendered, he joined Buffalo Bill Cody’s Wild West Show. (See Deanne Stillman’s excellent Blood Brothers for more.) Gardner does a good job of showing how events large and small conditioned the last 20-odd years of the Sioux Wars. For example, as he writes of the Yellowstone region, sacred ground to many Native groups, “the Panic of 1873 put a temporary stop to the Northern Pacific [Railroad], but it didn’t put a stop to the white man’s incursions.” Deals cut behind closed doors in Washington, D.C., were as significant as closer-to-home developments such as the Ghost Dance—and, as Gardner shows, unbending federal policies and their enforcers proved fatal to both Crazy Horse and Sitting Bull, who “would not suffer the ignominy of being imprisoned.” A grim highlight of the book is the denouement, which recounts what happened to Sitting Bull’s body in the years after his murder in 1890.

A strong work of Western history that strives to bring the Native American view to center stage.