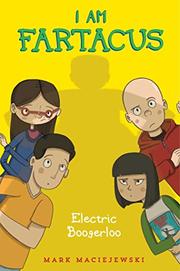 From the I Am Fartacus series, volume 2

Chub’s resolve to keep his nose clean doesn’t last past the second day as he finds himself, along with nemesis/ex-friend Archer, pre-placed at the top of draconian new principal Gunborg Lockhart’s hit list due to their extensive records of past misdeeds. The prospect of instant expulsion on the slightest pretext forces the two into reluctant alliance when Lockhart’s prized artwork Electric Kangaroo—by renowned one-armed glass artist Wahoolie but so resembling a pile of purple snot that Chub dubs it Electric Boogerloo—is stolen by parties unknown. Bald since second grade due to a misguided chemistry experiment and glib as all get out, the ever enterprising Chub makes a memorable narrator as he dishes up a lively account of the ensuing desperate search for clues to the culprit. He also heads a posse of classmates who likewise display as many human quirks as comedic ones, such as Levi “Moby” Dick, who is intestinally hyperactive and so the (literal) butt of many gags but, with no motive beyond altruism, impulsively surprises Chub with a rare and coveted comic. Aside from comics-loving Japanese-American newcomer Megumi, the Seattle cast presents as white.