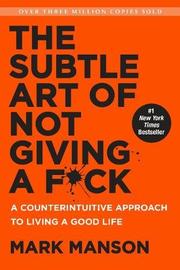 THE SUBTLE ART OF NOT GIVING A F*CK

A Counterintuitive Approach to Living a Good Life

An in-your-face guide to living with integrity and finding happiness in sometimes-painful places.

Popular blogger Manson (Models: Attract Women Through Honesty, 2011) criticizes self-help books for their fundamentally flawed approach of telling readers they're special, assuring them that they can surpass—but, notably, not solve—problems, and encouraging them to embrace their exceptionalism. The author sternly disagrees, showing readers "how to pick and choose what matters to you and what does not matter to you based on finely honed values." Unlike simple affirmations or personal growth books designed to flatter or soothe, Manson urges readers to "change what you value and/or how you measure failure/success.” Having better values creates better problems to solve, and those achievements will lead to a legitimately improved life. Throughout, the author continually slaps readers sharply across the face, using blunt, funny, and deceptively offhand language when expanding on his key principle: "Not giving a fuck does not mean being indifferent; it means being comfortable with being different….There’s absolutely nothing admirable or confident about indifference. People who are indifferent are lame and scared. They’re couch potatoes and Internet trolls….They hide in a gray, emotionless pit of their own making, self-absorbed and self-pitying, perpetually distracting themselves from this unfortunate thing demanding their time and energy called life.” Manson's cheeky but thoughtful opinions combine with in-depth advice in such sections as "You're Wrong About Anything (But So Am I)" and "How To Be a Little Less Certain of Yourself” (hint: “if it’s down to me being screwed up, or everybody else being screwed up, it is far, far, far more likely that I’m the one who’s screwed up”). This book, full of counterintuitive suggestions that often make great sense, is a pleasure to read and worthy of rereading.

A good yardstick by which self-improvement books should be measured.