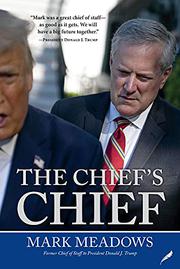 Donald Trump’s former chief of staff serves up servile homage to a man he’s sure will make a comeback bid in 2024.

No president could ask for a more fawning yes man than Meadows. Trump is a genius, a savior, the author avers in this cliché-stuffed, formulaic celebration. He’s a bulwark against what Trump calls “the Radical Left Democrat Communist Party.” That speech he gave at Mount Rushmore, if anyone remembers it? “One of the finest in American history.” Of course, Trump, God’s personal pick, didn’t really lose the 2020 election. When things go wrong, it’s always someone else’s fault. For example, Trump appointed Kavanaugh and Gorsuch to the Supreme Court only for them to rule “in ways that were deeply disappointing to the MAGA movement that had made their appointments possible.” Thanks to Pelosi and the Dems, the economy, formerly strong “due to the work of President Trump and his advisors,” tanked during the pandemic. Speaking of which, “had it not been for the China Virus, we could have spent the past months reaching more voters and running up our historic vote totals even higher”—not to mention battling Fauci, Milley, and countless other enemies. If there’s a conspiracy to be found or an enemy to be named, Meadows does so. Sometimes he falls off message, as when he writes of a typical campaign rally, “the energy of these patriots, all united for a common cause, celebrating their prosperity and patriotism in a shared space, is something you can’t describe until you’re in the middle of the crowd with them.” Prosperity or forgotten/downtrodden Americans: You can’t have it both ways. As for the Jan. 6 mob? All Meadows can muster is a pale “what occurred that day was shameful”—with the immediate deflection that a few bad apples spoiled a noble showing of support for their heroic leader.

A Trump idolator’s dream book. Everyone else should stay far away.