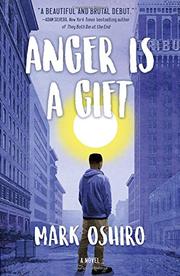 ANGER IS A GIFT

Rooted in the working-class neighborhoods of Oakland, California, this is a tale of youth of color, diverse in sexuality and gender, organizing to challenge state-sanctioned violence.

Black teenager Moss Jeffries is still grieving from the loss six years earlier of his father by the trigger finger of a police officer. Moss struggles with self-doubt and anxiety-induced panic attacks, finding comfort in his emerging relationship with Javier, a Latinx boy who’s just as tender as he is bold. As the school year begins, the school resource officer assaults Moss’ friend Shawna, claiming to suspect drugs—but the young people know that it’s really about her decision to fully embrace her black trans identity. When the administration installs metal detectors, resulting in a tragic injury for their friend in a wheelchair, Moss and his circle organize to dismantle the system of violence at their school, beginning with a wildcat student walkout. They demonstrate that there will continue to be resistance wherein aggrieved communities gather in solidarity to build meaningful lives of collective joy, heartful struggle, and deep love. Moss’ mother, Wanda, offers, “Anger is a gift. Remember that….You gotta grasp on to it, hold it tight and use it as ammunition. You use that anger to get things done instead of just stewing in it.”

A masterful debut rich with intersectional nuance and grass-roots clarity, Anger is a Gift is hella precious, hella dope.