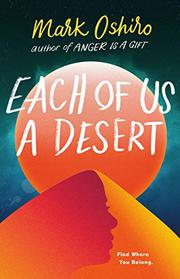 EACH OF US A DESERT

What does it mean to come into your own power by letting go of it?

The villagers of Empalme devoutly pray to Solís, the feared higher power who unleashed La Quema, or fire, on humanity for its ills of greed, war, and jealousy. As the village cuentista, Xochitl listens to and receives the villagers’ stories into her body, clearing their consciences, preventing the manifestation of their nightmares, and releasing them to Solís in the desert. Having diligently played this role since childhood, she is now a deeply lonesome 16-year-old whose only comfort comes from cherished poems. Worn weary by her role, she leaves on an odyssey in search of another way to exist. In their sophomore novel, Oshiro deftly weaves an intricate, allegorical, and often gory tale within a post-apocalyptic desert setting that readers will feel so viscerally they may very well need to reach for a glass of water. It is a world parallel to ours, rife with Biblical references and the horrific traps that Latinx immigrants face while seeking better lives. Xochitl’s first-person, questioning narration—interlaced with terrifying cuentos that she receives on her journey—is the strongest voice, although secondary and tertiary characters, both human and mythical, are given a tenderness and humanity. All main characters are Latinx, and queer relationships are integrated with refreshing normality.

A meditation and adventure quest offering solace to anyone bearing an unfair burden.