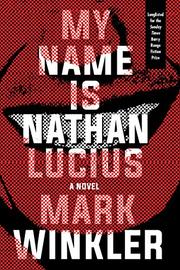 MY NAME IS NATHAN LUCIUS

A loner's psychopathic tendencies gradually come to the fore in this South African novelist's U.S. debut.

Nathan Lucius works selling advertising space for a Cape Town newspaper. His only friend appears to be the old woman who runs a ramshackle antiques shop near his apartment. His boss, Sonia, is an occasional drinking buddy, though Nathan seems more focused on the length of her nipples than anything having to do with her personality. Told in the first person, the novel spends a great deal of time detailing the aimlessness of Nathan's day-to-day routine, which also includes an affair with the middle-aged divorcée who lives in the apartment next to him. What drama there is begins with the elderly antiques dealer asking Nathan to assist her in a mercy killing to escape the pain of the cancer that's ravaging her body. The second half of the novel switches between the interior monologue of a now-institutionalized Nathan and his childhood memories that may or may not have been formative. What this all adds up to or why we are supposed to care about Nathan is anybody's guess. He's a squirrelly narrator without the cunning or depth or torment that might engage you in a borderline personality. He's also obsessed with bodily fluids and has a particularly off-putting penchant for disgusted descriptions of women's breasts and genitalia. It all seems intended to be dark and daring, but it's just tediously unpleasant.

His name is Nathan Lucius. And that's nothing to brag about.