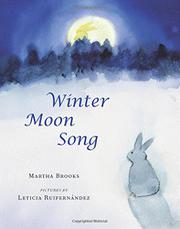 Quiet but joyful, this is an original story based on a traditional theme found in many cultures.

The author’s note mentions that in some Native American cultures, as well as in China, Korea and Japan, the trope of the rabbit in the moon is well-known. Brooks learned about it from a Lakota elder and then spun her own tale. A young rabbit in a northern clime learns the “Winter Moon Song.” On his way home from rehearsal for the annual performance, he stops in the woods and looks up at the image of the “rabbit-in-the-moon” and remembers the story, told by his mother, of love and sacrifice binding together the Great Mother, Creator Rabbit (imagined by Brooks), and one of her earthly creations, a little rabbit. The song continues to honor this story and is meant to “lighten the darkest month of the year with a trail of magic.” Yet the new singer is not satisfied with the performance. Instead of the churchlike place with candlelight where the rabbits gather, he starts to sing right under the moon, “with the rabbit pattern clearly visible,” beginning a new tradition. The soft watercolors, in subdued gray and deep blue, with some contrasting warm brown and golden shades, set a tranquil tone.

A subtle tale, perhaps best read to a thoughtful child in the intimate setting of a winter bedtime.