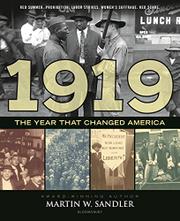 The Year that Changed America

The year 1919 was a significant one in 20th-century American history.

Sandler draws on a wide range of resources to present some of the most compelling news stories of a banner year. In Boston, a huge tank of molasses exploded, sending a lethal flood of syrup across an area largely occupied by impoverished immigrants. Both soldiers just returned from the Great War and those who’d patriotically served on the homefront discovered that there’d be few jobs for them—most of those at wages insufficient to support families—leading to numerous strikes. Reacting to intolerable repression, black Americans struck back at white abuses in a series of violent racial conflicts (described as “riots”) that rocked both urban and rural communities. The U.S. attorney general pushed back against a perceived “Red Scare” of communist agitators, leading to mass imprisonments and deportations that reflected more a growing sense of anti-immigrant prejudice than any actual danger. Women were campaigning to achieve voting rights, and Prohibition was instituted. Each chapter attempts to relate that section’s issue to modern problems, in one case tenuously drawing a connection between labor unrest and climate change. Sandler’s prose is vigorous, impassioned, and carefully contextualized. If some of his choices seem odd (he fully reports the Molasses Flood, a regional story, while the massive international influenza epidemic of the era receives scant coverage), it’s nevertheless a fascinating story, augmented by numerous attractive archival images.

An entertaining and instructive look at a tumultuous year.