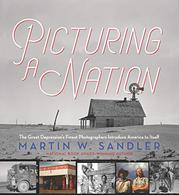 The Great Depression’s Finest Photographers Introduce America to Itself

In 1935, as part of its effort to support farmers, the Resettlement Administration (later renamed the Farm Security Administration) began a photography program.

With remarkable foresight, project administrator Roy Stryker recognized that the photographers should move beyond the stated goal of photographing government agents providing aid: He instructed his talented team to create images that “introduced America to Americans.” The best American photographers, many unemployed, participated, crafting achingly honest images of desperation and hope, many of which later became iconic. Later Stryker would prevent the destruction of the huge archive of photographs at a time when few recognized its value as both a historical record and as brilliant art. Sandler has gathered together both familiar images and ones less often reproduced,  most in black and white but some in color. A general overview of the project is followed by sets of photographs arranged by region. Each group is accompanied by an introduction that provides context by describing issues significant to the area. Informative captions can be challenging to read, displayed in small white font on a dark background. Although the text is both accurate and engaging, the greatest value of this effort may be in reaching those who just browse the beautifully reproduced images that are outstanding in depicting both challenges and the heroic human response in a difficult time. Profiles of the photographers (almost all White, save for Gordon Parks, an African American) enhance an already excellent presentation.