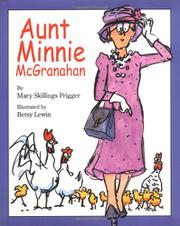 Prigger bases her engaging debut on an incident in her own family. The setting is 1920, so Minnie can’t be considered obsessive-compulsive; instead, she’s a woman with a system for keeping things shipshape and just so. Her farmhouse is trim and neat, as is her garden and barn. Her neighbors snipe that it’s a good thing that Minnie, a spinster, has no children, who would surely interfere with her system. Then the telegram arrives: “Come quick. Your brother and his wife have had an accident. Their children are orphans in need of a home.” Aunt Minnie goes and gathers the children, all nine of them, in a thrice. The neighbors look on with amazement (as will readers) when all the potential for pandemonium is breezily absorbed into Aunt Minnie’s system: “The oldest looked after the youngest. The ones in the middle looked after each other. And Aunt Minnie looked after them all.” Tweak this template a little, and it works for grocery shopping, housework, bathing, and going to the johnny house. There are episodes of stubbornness and fretting, dawdling, pouting, and crying; there is also noise, music, laughter, and hugging, all captured with elemental clarity and a visual caress in Lewin’s watercolors. This story is a sweet and simple song of grace, love, and responsibilities met; it will leave children aglow and adults in tears. (Picture book. 4-8)