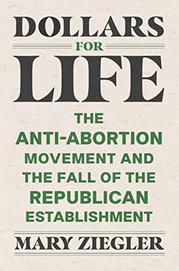 The Anti-Abortion Movement and the Fall of the Republican Establishment

The far-reaching consequences of abortion activism.

Legal historian Ziegler, who has documented the complexities of the abortion debate in several previous books, revisits the growth of the anti-abortion campaign with a focus on its impact on the Supreme Court, connection to campaign finance laws, and shaping of the contemporary political scene. After a brief overview of medical and legal arguments about abortion beginning in the mid-19th century, the author traces the controversy over right to life versus right to privacy that culminated in the 1973 Supreme Court decision in Roe v. Wade. After the court upheld Roe in 1992, activism shifted from local candidates to the national scene, focused on supporting presidential aspirants who would appoint conservative justices to the court. Campaign finance reform became part of that effort because limiting contributions made it difficult for advocacy groups to exert influence. The anti-abortion movement, therefore, saw an advantage in doing away with campaign finance limits, which, its lawyers argued, were equal to “restrictions on political speech.” Republicans have seen the issue of judicial nominees as a way to energize base voters, and they welcomed campaign finance deregulation to fill their coffers. However, as Ziegler shows, both alliances have weakened the GOP, opening the door to well-funded populists and fostering the party polarization that allows extremists, whom the party previously would have sidelined, to flourish. Ziegler’s deeply researched analysis draws on histories of the anti-abortion and abortion-rights movements, media reports, archival sources, legal decisions, and interviews—notably with James Bopp Jr., an Indiana lawyer at the forefront of anti-abortion strategy—to argue persuasively that the political complexities of abortion activism threaten democracy. Overturning Roe, and leaving abortion law up to individual states, is not the end goal of the anti-abortion movement; rather, activists are striving for a constitutional amendment that will outlaw abortion nationally.

A sober, knowledgeable scholarly analysis of a timely issue.