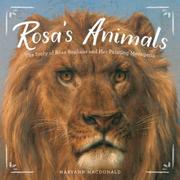 The Story of Rosa Bonheur and Her Painting Menagerie

This handsomely designed and illustrated biography grandly introduces the most famous Western female artist of her time.

The sexist conventions of the 19th century denied Rosa Bonheur a formal art education, but she was undeterred from pursuing her passions. Bonheur’s artist father undertook her training as a painter and allowed her to pursue her interest in painting animals by bringing live models to the family’s studio. By age 19, Bonheur saw her work accepted into the prestigious Salon de Paris and soon became internationally renowned as a painter and sculptor of domestic and wild animals. Her unconventional study habits included visiting slaughterhouses to sketch anatomy and disguising herself as a man to enter events such as horse fairs, which were forbidden to women. A passionate lover of animals and nature, Bonheur kept three lions as pets. She was also admired by heads of state and international celebrities; Empress Eugénie convinced her husband, Louis-Napoleon, to make Bonheur the first woman to receive the Legion of Honor. Impressionists, however, criticized her work as too realistic. Macdonald skillfully puts Bonheur’s life and work in cultural and historical context, discussing in detail some of the artist’s most famous works, including The Horse Fair and Ploughing in the Nivernais. Throughout the text and on the case covers are beautiful reproductions of Bonheur’s work and historical ephemera.

An elegant, insightful portrait of an artist worth knowing.