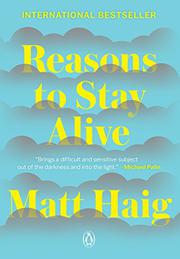 A British novelist turns to autobiography to report the manifold symptoms and management of his debilitating disease, depression.

Clever author Haig (The Humans, 2013, etc.) writes brief, episodic vignettes, not of a tranquil life but of an existence of unbearable, unsustainable melancholy. Throughout his story, presented in bits frequently less than a page long (e.g., “Things you think during your 1,000th panic attack”), the author considers phases he describes in turn as Falling, Landing, Rising, Living, and, finally, simply Being with spells of depression. Haig lists markers of his unseen disease, including adolescent angst, pain, continual dread, inability to speak, hypochondria, and insomnia. He describes his frequent panic attacks and near-constant anhedonia, the inability to experience pleasure. Haig also assesses the efficacy of neuroscience, yoga, St. John’s wort, exercise, pharmaceuticals, silence, talking, walking, running, staying put, and working up the courage to do even the most seemingly mundane of tasks, like visiting the village store. Best for the author were reading, writing, and the frequent dispensing of kindnesses and love. He acknowledges particularly his debt to his then-girlfriend, now-wife. After nearly 15 years, Haig is doing better. He appreciates being alive and savors the miracle of existence. His writing is infectious though sometimes facile—and grammarians may be upset with the writer’s occasional confusion of the nominative and objective cases of personal pronouns. Less tidy and more eclectic than William Styron’s equally brief, iconic Darkness Visible, Haig’s book provides unobjectionable advice that will offer some help and succor to those who experience depression and other related illnesses. For families and friends of the afflicted, Haig’s book, like Styron’s, will provide understanding and support.

A vibrant, encouraging depiction of a sinister disorder.