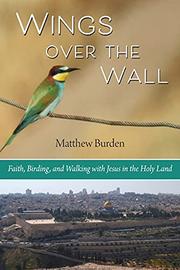 WINGS OVER THE WALL

Faith, Birding, and Walking with Jesus in the Holy Land

A bird-centered devotional memoir about a trip to Israel.

In this well-designed remembrance, Burden, who previously authored the historical-fiction Hidden Kings Trilogy and several other religious works, relates a trip he took with a group to the Holy Land in 2018. Christian readers will particularly appreciate the centrality of religious pilgrimage in this account, particularly the narrative’s centerpiece—his visit to “the place where it all began," Nazareth. Indeed, he makes sure to characterize his trip as less of a vacation than a religious journey, although he notes: “If I had taken a tour just to snap a few pictures and add a few birds to my life list,” says the avid birder, “it would not be a pilgrimage.” This note of affection for avians sounds throughout the book; for all his sightseeing and spiritual experiences, Burden is also always keenly aware of feathered friends flitting around him. These sightings range from the “usual suspects,” such as hooded crows, common mynas, and countless doves, to newer encounters with the Eurasian blackcap, the common whitethroat, and Old World warblers: “Above my head wheeled dozens of swifts, cutting through the morning air with graceful, scythe-like sweeps,” he writes at one point, with the understated lyricism that characterizes much of the narrative; at another juncture, he intriguingly imagines Nazareth as closely resembling what Jesus would have seen: “The birds winging about were the same species he would have spied as a child,” he writes, “the same sparrows and doves that he referenced in his teaching.” This combination of birding and faith works surprisingly well, resulting in a spiritual memoir of memorable sincerity.