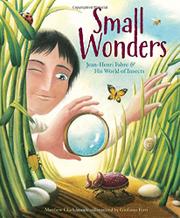 Jean-Henri Fabre and His World of Insects

The rewards of simply taking time to bend down for a closer look are celebrated in this tribute to the great French entomologist.

Seeing as a lad that “every patch of dirt and tangle of weeds buzzed with insects: dazzling beetles, ferocious wasps, sweet-singing crickets, and more,” young Fabre went on to devote a long life to watching common insects rather than just collecting dead specimens as most of his contemporary colleagues did. The distinctive, enduring affection with which he regarded his diminutive subjects regardless of their often savage behavior comes through clearly here, both in Smith’s warm narrative and Ferri’s equally engaging views of the naturalist. He delightedly discovers a shimmering hoplia beetle beneath a leaf, smiles from his sickbed as a handful of hibernating bees revives after his son carries them indoors, and is wonderstruck by an account of how Cerceris wasps paralyze beetles as live food for offspring. (The illustrator has a little fun with viewers by adding a looming insectile shadow as well as close-up views of hovering wasps in this last scene.) Fabre’s many original discoveries and insights won him renown, and though he is largely unknown to nonspecialists today, his nose-to-nose approach to the natural world is well worth commemorating to modern readers.

Long before Yogi Berra said, “You can observe a lot by watching,” Fabre proved it so.