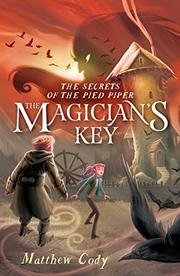 From the The Secrets of the Pied Piper series, volume 2

Following the events of The Peddler’s Road (2015), 12-year-old Max is desperate to return to the Summer Isle where her brother, Carter, is trapped with the children the Pied Piper led away from the town of Hamelin.

However, the only path between the lands is through a hidden and locked door. Thankfully, the white girl possesses a magical map. The key, however, proves more difficult to find. An evil magician claiming to have a Key of Everything is her only hope, but dealing with a man who employs a zombie as his butler and steals people’s souls seems like no hope at all. Max and Carter can count on the aid of trolls, goblins, and elves as well as the children of Hamelin. But the most surprising and dangerous friend is the Pied Piper himself. Chapters feature multiple story threads on both sides of the locked door. Characters are much more complex and interesting in this sequel than in the previous book, making this a definite upturn from the lackluster start to the trilogy. The intersection of magic and modernity provides an interesting forum for the discussion of racial profiling, disenfranchised individuals, and the effects of evil in the world. Able writing and storytelling weave these themes into a story that won’t disappoint.

Depth and complexity are added to great effect in this second installment.