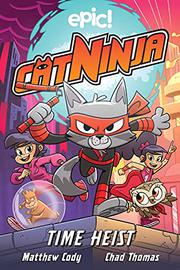 From the Cat Ninja series, volume 2

by Matthew Cody ; illustrated by Chad Thomas with Warren Wucinich

A barrage of baddies comes for Cat Ninja.

Mild-mannered Claude the cat lives with Leon and Marcie Kwon and their mother; but when the city is threatened, Claude becomes Cat Ninja! (Only the kids know his secret.) Aided by former criminal mastermind Mr. Squeak (once known as Master Hamster), Cat Ninja fights the mind-controlling King Crab. Things get complicated with the hatching of Hoot, a superstrong owlet that Leon brought home from school as an egg (he thought it was a chicken egg). With Hoot’s help, Cat Ninja bests Electric Eel, Mecha Mechano, and Rhino Blasty, but the thing about this new wave of villains is that they only seem to be interested in attacking Cat Ninja. Apparently there is a bounty on his head. When Hoot’s father, Chronowl, arrives from the year 3021 they find out who is behind the attacks, their true target…and that all the world is at stake. This second collection of Cat Ninja digital comics (Nos. 6 through 10) is, if anything, more fun than the first. Bright, action-stuffed panels drawn by Thomas and colored by Wucinich don’t skimp on the visual gags. The Kwons are cued as Korean, and their community is diverse. Backmatter includes a sketchbook and superhero and supervillain name generators.