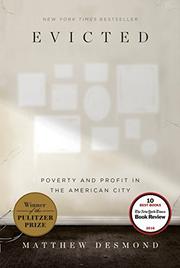 Poverty and Profit in the American City

A groundbreaking work on the central role of housing in the lives of the poor.

Based on two years (2008-2009) spent embedded with eight poor families in Milwaukee, Desmond (Sociology and Social Science/Harvard Univ.; On the Fireline: Living and Dying with Wildland Firefighters, 2007, etc.) delivers a gripping, novelistic narrative exploring the ceaseless cycle of “making rent, delaying eviction, or finding another place to live when homeless” as experienced by adults and children, both black and white, surviving in trailer parks and ghettos. “We have failed to fully appreciate how deeply housing is implicated in the creation of poverty,” writes the author. Once rare, eviction is now commonplace for millions of Americans each year, most often as a result of insufficient government support, rising rent and utility costs, and stagnant incomes. Having gained unusual access to these families, Desmond immerses us in the lives of Sherrena Tarver, a teacher-turned-landlord who rents inner-city units to the black poor; Tobin Charney, who nets more than $400,000 yearly on 131 poorly maintained trailers rented (at $550 a month) to poor whites; and disparate tenants who struggle to make rent for cramped, decrepit units plagued by poor plumbing, lack of heat, and code violations. The latter include Crystal, 18, raised in more than two dozen foster homes, who moved in with three garbage bags of clothes, and Arleen, a single mother, who contacted more than 80 apartment owners in her search for a new home. Their frantic experiences—they spend an astonishing 70 to 80 percent of their incomes on rent—make for harrowing reading, interspersed with moving moments revealing their resilience and humanity. “All this suffering is shameful and unnecessary,” writes Desmond, who bolsters his stories with important new survey findings. He argues that universal housing vouchers and publicly funded legal services for the evicted (90 percent lack attorneys in housing courts) would help alleviate this growing, often overlooked housing crisis.

This stunning, remarkable book—a scholar’s 21st-century How the Other Half Lives—demands a wide audience.