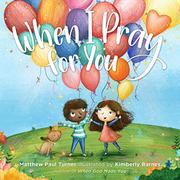 WHEN I PRAY FOR YOU

Turner adds another title to his picture-book series that highlights the miracles in the mundane (When God Made Light, 2018, etc.).

In the vein of children’s-bookshelf stalwart Oh, the Places You’ll Go, Turner’s rhyming text includes both prayers and life advice for a growing child, beginning with infancy and moving on to adolescence. At times the rhyme and meter are strained, muddling meaning and making the tempo feel occasionally awkward when read aloud. Overall, though, the book executes its mission, presenting Christian theological truths within the rhythmic inspirational text. For this third series installment Turner’s text is paired with a new illustrator, whose bright illustrations of wide-eyed children have great shelf appeal. While David Catrow’s previous illustrations in the series featured effervescent black protagonists, the child in Barnes’ illustrations appears white, though she occupies an otherwise diverse world. While illustrated as a prayer from a mother for her daughter, the text itself is gender neutral.

Though it will never usurp Dr. Seuss, it will still find a home where Christian families of faith seek inspirational picture books.