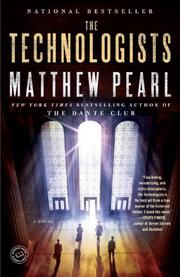 Brains and technology battle evil in Pearl’s (The Last Dickens, 2009, etc.) latest, an improbable but entertaining yarn of weird science.

Marcus Mansfield is trying to adjust to life as a civilian following years in a Confederate prison. He is a diffident and cautious fellow: “He did not volunteer for the war to be a hero, nor to change the world, either, but did think it was the best thing a man could do.” He also wants to be left alone, having applied for a night watchman’s job for the solitude and instead finding work in a dark corner of a machine shop, where he puts his talents to use designing things that are much ahead of their time. In a Boston scarcely bigger than a suburb today, he draws the attention of the head of a new school on the Back Bay along “surroundings that were grandly artificial, where the pupils would observe the way in which civil engineers could turn malodorous swamp...into a landscape of wide streets.” All this comes just in time for the chase at hand, for someone has in turn been sabotaging the shipping in Boston’s busy harbor, turning compasses upside down and sending freighters and schooners plowing into the docks at crazy angles. It’s up to Mansfield and a team of proto-geeks at MIT to figure out what sort of devious soul would want to make like a whale and wreak Moby-Dick’s vengeance on the good brahmins of Beacon Hill—and while the answer, which takes a good long time in coming, isn’t in the least bit predictable, it also makes sense once it comes into focus. Marcus’ enthusiasm for the chase is delightful—“We’ll need Tech’s best physicist on hand, of course!”—as is Pearl’s appreciation for both 19th-century science and technology and affection for Beantown and its history.

Of appeal to fans of Guy Ritchie’s Sherlock Holmes films, as well as aficionados of a good adventure layered with batteries, transformers and navigational tools.